If you train at home or travel a lot, you’re probably looking for reverse pec deck alternatives as you don’t have access to a machine.

As a personal trainer for over 3 decades, I’ve used all of these exercises with my clients. Many of them I would actually say are better than the reverse pec dec machine option.

In this article, I’ll first explain what makes an effective alternative to the reverse pec deck. I’ll then lay out the seven best home gym-friendly exercises that meet those criteria.

These exercises are all selected to mimic the movements closely, rather than just throw in exercises that ‘sorta’ do the same job!

Apart from the fact that it’s not always easy to find a reverse pec deck machine, this exercise does have a major problem.

The job of the posterior deltoids is to move your arms down and out to the sides. An effective exercise to work the muscle should follow that same function. Yet the reverse pec deck has you moving your arms horizontally behind you.

While this does a good job of moving the middle trapezius through its range of motion, it fails to do so with the posterior delts.

Most people consider the reverse pec deck to primarily be a posterior delt exercise, yet it completely misses the boat when it comes to movement direction. It does do a pretty effective job, though, of hitting the midge traps and the rhomboids.

What I Considered When Selecting the Best Reverse Pec Deck Alternatives

My first consideration when choosing these exercises was to make them home gym friendly. That means that they had to be able to be done with equipment you’re likely to have at home.

As a result, I have not included any cable row alternative exercises on this list. Instead, I have focused on exercises that can be done with dumbbells or resistance bands.

Next, I wanted to make sure that I was only including like-for-like exercises. At Strong Home Gym we pride ourselves on publishing quality articles that readers like you can apply in their home gym workouts.

While most other alternative exercise articles simply throw in anything that roughly works the same muscles, we want to provide more value.

That’s why we have only included exercises that effectively work the main target muscle – the posterior deltoids – through a full range of motion. In doing so, we are providing exercises that are better than the reverse pec deck.

What’s the Best Reverse Pec Deck Alternative of All?

Because I wanted to make this list home gym friendly, I have not included the absolute best reverse pec deck alternative of them all …

I do, however, want to mention it just in case you happen to have access to a double pulley cable machine. This exercise allows you to perfectly simulate the natural functional movement of the posterior deltoids, which is moving the arms down and out from the midline of the body.

Here’s how to do the cable reverse fly:

Equipment Needed for These Exercises

The lying dumbbell one arm rear delt raise does the best job of moving the posterior delts through their anatomical range of motion without a cable machine.

This exercise has you lying on the floor on your side, which may take a bit of getting used to. You only need to use a very light dumbbell to work the posterior delts, which is a very small muscle.

These are the dumbbells we recommend for ‘most people’.

We have spent over 50 hours of research and compared over 100 dumbbells. Adjustable dumbbells make sense for most home gyms as they save space.

The Nüobell dumbbells go all the way to 80lbs per hand. This means they are much more versatile than most 50lbs adjustable dumbbells. You can use these for heavy shrugs, squats and bench press etc.

The main reason they are the top pick is because of their shape. They actually feel like real dumbbells and are not awkward to lift like some others.

How to do the Lying Dumbbell One Arm Rear Delt Raise:

Resistance bands allow you to copy the movement of a cable machine. That makes this exercise an excellent substitute for the cable reverse fly.

With resistance bands, the exercise gets harder as you pull the bands further apart. That makes this a late phase loaded exercise. That’s not ideal because it goes opposite to the resistance curve of the posterior delts.

Despite this, the resistance band reverse fly is a very good home gym option to isolate this muscle.

How to do the Resistance Band Reverse Fly:

The bent over one arm band rear delt raise is a good substitute for the one arm bent over cable raise that you can do at home. Using a band instead of a dumbbell provides you with a better resistance curve to work the posterior delts.

Equipment needed for the Bent Over One Arm Band Rear Delt Raise:

How to do the Bent Over One Arm Band Rear Delt Raise:

The bent over dumbbell reverse fly is a good job of simulating the movement of the reverse pec  deck. With it, you are moving your upper arm muscles horizontally back while performing scapular retraction.

As mentioned earlier, however, this doesn’t allow you to move the posterior delts through their full natural range of motion. So, while this exercise is as good as the reverse pec deck it is not better than it.

The bent over dumbbell reverse fly can be done in both a standing and a seated position. Doing it seated places less strain on the lower back.

Equipment needed for the Bent Over Dumbbell Reverse Fly:

This is the weight bench we recommend for ‘most people’.

We compared over 70 benches against 12 criteria. This is our highest-ranked flat, incline & decline (FID) bench.

Some adjustable benches can be a bit wobbly when on the incline. But the AB-3000 is very sturdy.

With a height 18mm it’s comparable to benches that cost twice as much.

How to do the Bent Over Dumbbell Reverse Fly:

YTWs are the best exercise you can do to target the posterior delts if you don’t have any light dumbbells or resistance bands. This is a bodyweight exercise that really allows you to hone in on this tiny muscle group.

They’re also a great ‘prehab’ exercise – one that you perform to help prevent shoulder injuries occurring in future.

You’ll move through three positions in this exercise, with each one hitting one of the three key muscles worked with the reverse pec deck; the posterior delts, the middle traps and the rhomboids.

The incline bench version of the bent over fly is a stricter exercise. Because you are leaning on a bench, the possibility of cheating by kipping the hips to get the weight up is eliminated.

How to do the Incline Bench Bent Over Fly:

The bent over reverse fly with resistance bands does a good job of providing increasing resistance as you move through the full range of motion of the posterior delts.

That’s because the resistance is coming from an angle rather than straight down as it would with dumbbells.

How to do the Band Bent Over Reverse Fly:

You’ve now got a decent arsenal of exercises that will target the posterior delts, mid traps and rhomboids as good as, if not better than, the reverse pec deck.

They’re also an opportunity to mix up your rear delt training, providing your muscles with a new stimulus every now and then.

The key to getting the most from them is to use a relatively light resistance and focus on squeezing and feeling the muscles as you move them through their full range of motion.

Hit them a couple of times a week, using a band and a dumbbell exercise each time and you’ll start to see those posterior delts pop. 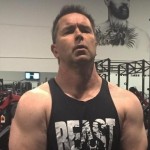 Steve Theunissen
Hi, I'm Steve. I'm a personal trainer, current home gym owner, former gym owner, and copywriter. I joined my first gym at age 15 and, five years later, I was managing my own studio. In 1987, I became the first personal fitness trainer in New Zealand. My work has been featured on Muscle and Brawn, Gymaholic, Fitness Volt, and many other places.